For weeks now, I had been looking forward to November 20th. The shelter needed to do a really big clean of the kennels and asked if any of the volunteers could take a dog for an overnight. I was ecstatic. A sleepover with a dog!

Thursday morning came, and after dance class, Mae, Audrey and I drove to the shelter with Sadie-Dog in tow. Obviously, as anyone knows, we come with a lot of barriers. Four kids, two cats, foster cats, Sadie and a very picky husband. Weeks prior I would look at the dogs at the shelter, saying, “If you’re still here on the 20th, I’m taking you home for a sleepover!” But, of course, they were adopted (which yay!) but nay for my hopes of being able to find a dog compatible with all of our twenty needs.

I know I sound absolutely nuts, needing to go through all these hoops with all that I already have going on, but I wanted to make sure that the dog was right for us, even if just for a night.

So many people said, “Are you sure you’re okay with adding into the chaos?” and I’d smile and say, “What’s one more thing?”

Sadie was so nervous when we got there. I brought her to a meet and greet room, and one of the adoptions counselors said, “Which one would you like to test out?”

I asked her which one she would think is best. I like her and I trust her judgement. She knows about all my barriers. She said, “How about JD?”

I knew of JD from my friend Jen who was telling me the day before that she was in love with him. So if Jen liked him, that’s a good enough sign for me.

She brought JD into the other meet and greet room to meet the girls. He didn’t pay much attention to them and all their energy, so I went and got Sadie and we met outside in a caged in area for an official meet.

When I went to put Sadie back in the car, JD looked back at me, his eyes saying, “Why aren’t you coming with me?”

I signed the sheet saying JD was mine for the night and we went on our way, telling them we’d be back at the appointed time time to pick him up (given he wasn’t adopted.)

All day I thought about him. I kept hoping that no one would adopt him. That’s terrible, right? I mean it’s just an overnight vs a lifetime of love. I was sounding so selfish.

When I finished teaching BodyPump at 6:30, I checked my phone – no calls. He was still there.

I packed him up and got him some medicine, because he was starting to come down with kennel cough.

Did I also mention he’s ten? Yes. He’s a ten year old dog, a German Shepherd, and kennel cough, at that age, could be very bad for him.

A nice, quiet place to rest his head was just what he’d need to get better.

We left his leash on him for the first hour after getting home, until the kids had gone to bed. Nothing bad happened.

We let him off his leash and he laid down and went to sleep.

The cats weren’t so happy about a new dog, so they hissed from under our bed, so I chose to sleep in the basement with him, and we had zero issues. He’s 100% house broken, gentle, quiet, and just wanted someone he could love.

I was supposed to drop him off at the shelter the next day around noon.

Yah, so he’s still here. I couldn’t give him up. If anything, he just needed a place to get healthy again, so at the very least, he’d be here through his kennel cough.

Matt waited for him to do something bad. Poop in the house, lunge at Sadie, terrorize the cats, hate the kids…he’s done none of that. He follows us everywhere, knows his manners and is exactly the kind of dog we’d have in our house.

So we’re keeping him.

I refuse to call him JD because that name makes me sad. He answered to Jay, but he doesn’t look like a Jay. And since Matt was so kind to give into my puppy dog eyes and said we could keep him, I let him pick a name. He settled on Beau.

So Beau is very spoiled. He gets his kennel cough meds, though he hardly shows any symptoms. It’s amazing what a nice home can do when you’re a sick animal. He’s very thin, so my number one goal is to remedy that. He gets his regular meals, plus coconut oil because his fur is awful. He drinks water with a little apple cider vinegar in it, because that’s good for a zillion things (dogs, cats and humans alike!) He gets probiotics mid day hidden in some cheese or a hard boiled egg. He gets a beef chew every night.

He’s absolutely spoiled rotten. Already his fur isn’t coming out as much as it had been. Before, you could just grab it by the handful. He was so mangy. I brushed him and his fur filled up a grocery bag. Matt brushed him yesterday and not nearly as much was lost. I’ll call that a huge win.

Sadie tolerates him. Right now they’re laying on the same piece of blanket about 2 feet between them. We went for a walk and they didn’t fuss over each other. For a whole three minutes, Sadie let Beau sleep on her couch in our bedroom. 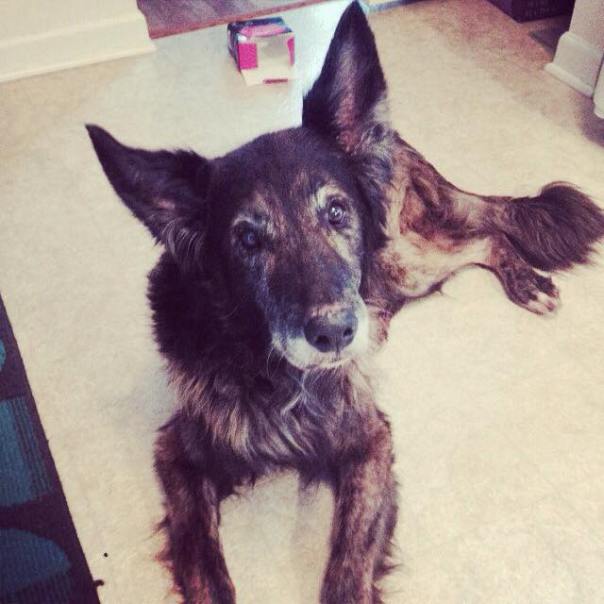 Four days and already we’re all in love with him. I don’t have any idea how much time he has left. You can never tell with big dogs. One thing I do know is that for the time he has left, be it 6 months or 4 years, he will know love and be loved.

Two sisters from two misters. What could be more fun?
View all posts by Cassie »